Photos And Videos Huge Skeletons: Proof, That The Earth Was Inhabited By Giants.

Anne Curtis, Heart Evangelista, and their fellow celebrities are calling for donations for the Philippine General Hospital (PGH), the country’s biggest COVID-19 referral hospital, which caught fire around 1 a.m. today, May 16.

“Devastated to hear about the fire that hit PGH,” actress Anne Curtis on a Twitter post also today. “I will personally be donating… but will share more details for those who would like to help too!”

She also said her foundation Dream Machine has talked to personnel from PGH about donations. Her statement was followed by another tweet bearing a poster which explains how people can donate to the hospital.

Actress-TV host Karla Estrada also encouraged her fans to donate to PGH, as she showed photos of newborn babies who were evacuated from the hospital’s neonatal intensive care unit, through her Instagram page today.

“Bayanihan na tayo para PGH na nakaranas ng sunog (Let us work together for PGH, which was hit by fire). Your kind heart is badly needed this time,” she said.

Estrada also showed a poster explaining where people could send cash or in-kind donations to victims of the fire.

Evangelista meanwhile showed a poster calling for in-kind and monetary aid through the youth group Tulong Kabataan, via her Instagram Story today. 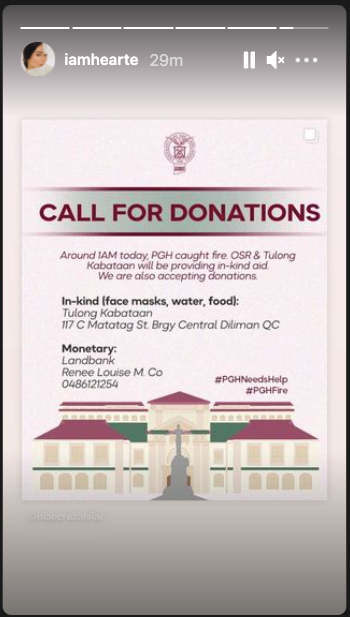 Andrea Torres and Ria Atayde called for breastmilk donations for the newborn babies who were affected by the fire.

“PGH caught on fire and newborns are greatly affected. Please help if you can,” Atayde said as she showed a poster from PGH’s milk bank, through her Instagram story today. 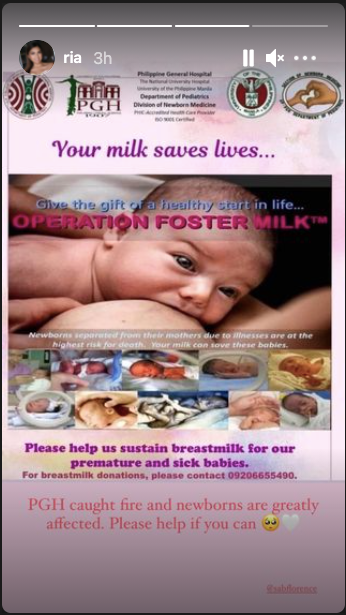 Torres also featured the same poster on her Instagram Story, along with screenshots from the milk bank’s announcement on Facebook, as it explained that the fire affected power for its refrigerators. 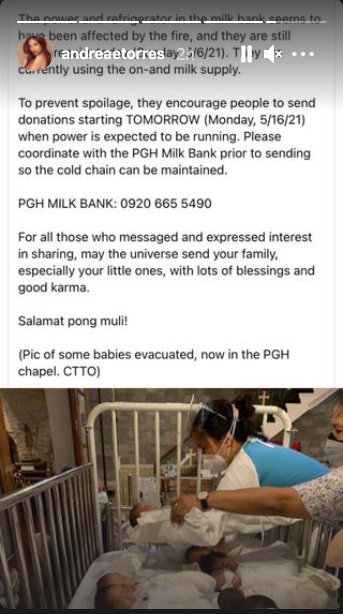 The fire that razed PGH was said to have lasted for almost five hours, after it was extinguished at around 5:41 a.m. Bureau of Fire Protection officials said the fire started at the hospital’s third floor and reached the third alarm. As of writing, investigations are still on-going to find out the cause.

Powered by WordPress | Designed by TieLabs
© Copyright 2021, All Rights Reserved